In the previous Cranky Ladies post I talked about starting the story I'm submitting for this anthology. This time I'm going to move around another aspect of writing the story, one that's important to any narrative fiction: that is, figuring who the narrator will be.
Any story about Lilian Cooper automatically includes Josephine Bedford. They met as young women, somewhere around 1885 or 86, while Lilian was trying to figure a way into medical school, and as I mentioned, Josephine actually suggested a way to do it. When Lilian began her studies, Josephine decided it was time to enter the outside world too. She enrolled in a painting course in Slade School, and she and Lilian shared London lodgings. Thus began a friendship that, unlike many marriages, did last till death parted them, and then only when Lilian, her 50 year medical career over, retired at 80, and died 5 years later, in 1947.
The cover of the "official Lilian Cooper biography" has full face portraits of them both: 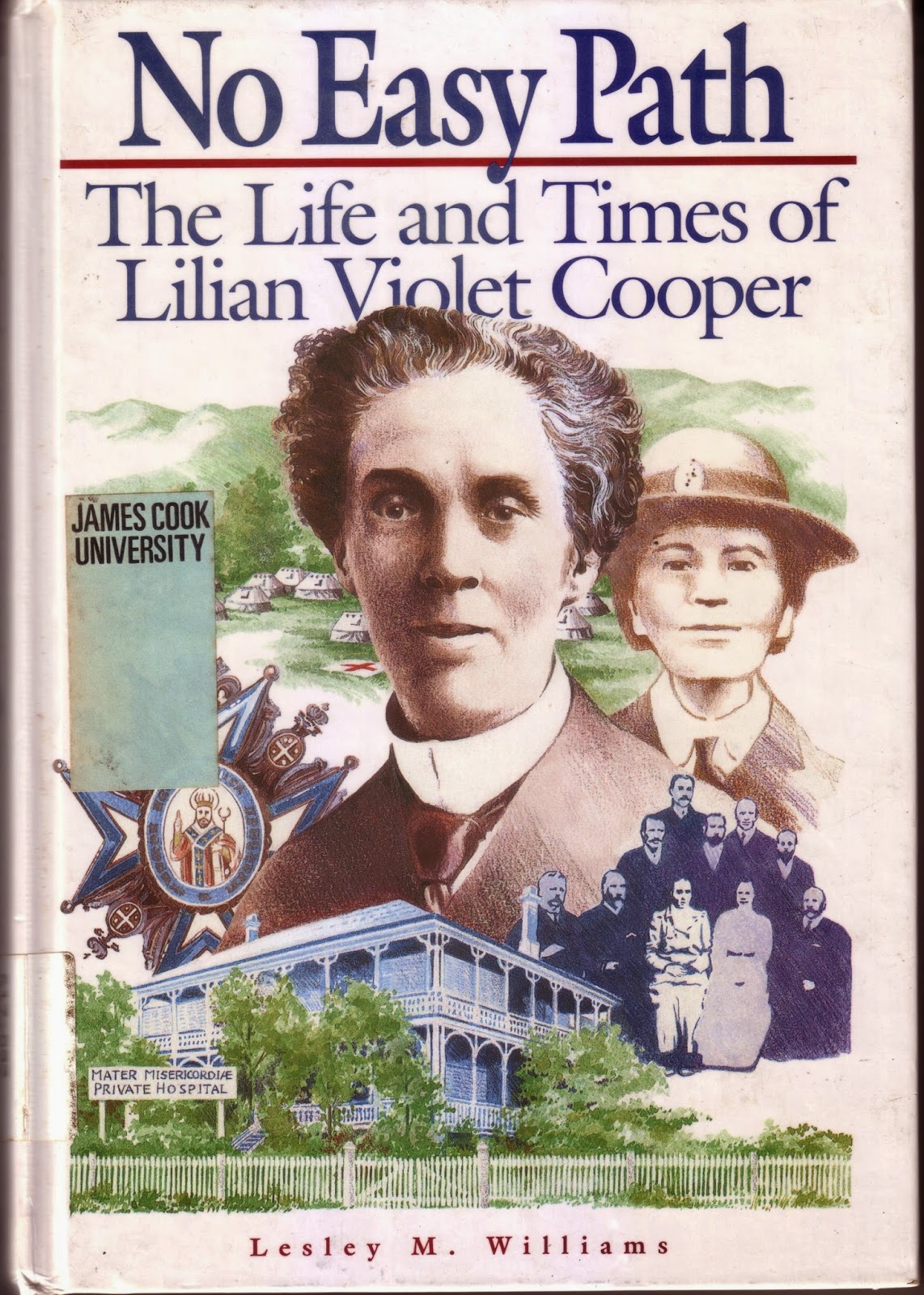 Lilian's picture draws on a later source than the one in my previous blog. She's kept the almost clerical collar, but the dress or coat is very plain, her hair is greyer as well as considerably wilder, and her face shows signs of age, though the jaw is still very evident.
The smaller portrait of Josephine epitomises the official biographer's description of her as "dark-haired, small, sedate, but full of the joy of life."  This face speaks to me of serenity, quiet rather than iron determination, and probably a strong if subtle sense of humour. It's the image around which I assembled my first vague notions, via a bath of data, into a hypothetical story arc. With that came the first problematic question: Who is this story's narrator?
Usually, narrators for my fiction find me, bringing the story with them. The trouble comes in building past the opening, "given" segment that the Black Gang, my creative crew, will suddenly land on me out of some Other Place. But with Lilian's story, I was left with a bunch of White Gang - the editorial component - questions about, Is it to be first person or third? Told from where? And whose pov should it be?
I considered third person, omniscient or otherwise. Then, Lilian herself as a narrator. Only the first scene's arrival showed the obvious choice: somebody who knew Lilian well, who lived with her on a day to day basis, someone who, though much less flamboyant, must have had amazing composure and equal determination, who could act as a foil to Lilian's masculinised persona, yet could reveal the complexities behind the brusque medical facade. Well, yes. Who but Josephine?
When the first words actually  hit the page, they were almost inevitable. Lilian, driving somewhere, in her perennial haste to an emergency, Jo with her, doubtless as always. And a fresh confrontation heralded over Lilian's speeding:


“Damn and blast it, Jo, it’s that bloody Higgins again!”
“Now, dear, do try to contain yourself. The man’s only doing his job -!”

Once actually heard, Jo's voice functioned effortlessly, almost as she must have in real life: the quiet but neither passive nor obliterated partner, the one who probably nursed Lilian through her fractured skull after her buggy-horse bolted - and then assumed the job of driving Lilian on her rounds. The one who learnt to change tyres when Lilian bought her car; the one who almost certainly managed their home life, yet shared every social occasion, from play openings to medical association meetings to overseas trips. The one who maintained her own life as a social activist, who unfalteringly supported groups like the SPCA in Brisbane, and the Creche and Kindergarten Association, as well as sharing Lilian's medical interests.

Josephine naturally accompanied Lilian when the latter visited the US in 1911 to study surgery with the Mayo brothers, then take her Doctorate of Medicine from Durham University in 1912. Meanwhile Josephine researched her own interests, particularly in the overseas initiatives on public playgrounds. And in 1916, when Lilian volunteered her medical services to the Australian Army, who told her to "stay home and knit," both women joined the Scottish Women's Hospitals, who posted Lilian as surgeon to a military hospital just behind the Serbian army lines in Macedonia.
Lilian must have been in her element. The hard conditions, the desperate state of some her cases, gangrened, suffering peritonitis and/or starvation, the need for unfalteringly fast diagnosis and action, were the staples of her medical life, if less often applied to men than to women and children.
Josephine also came into her own. She enlisted as an orderly, but she ended in charge of the unit's Transport Column, which meant maintaining fourteen ambulances, and probably, their young women drivers, over some truly horrific terrain. 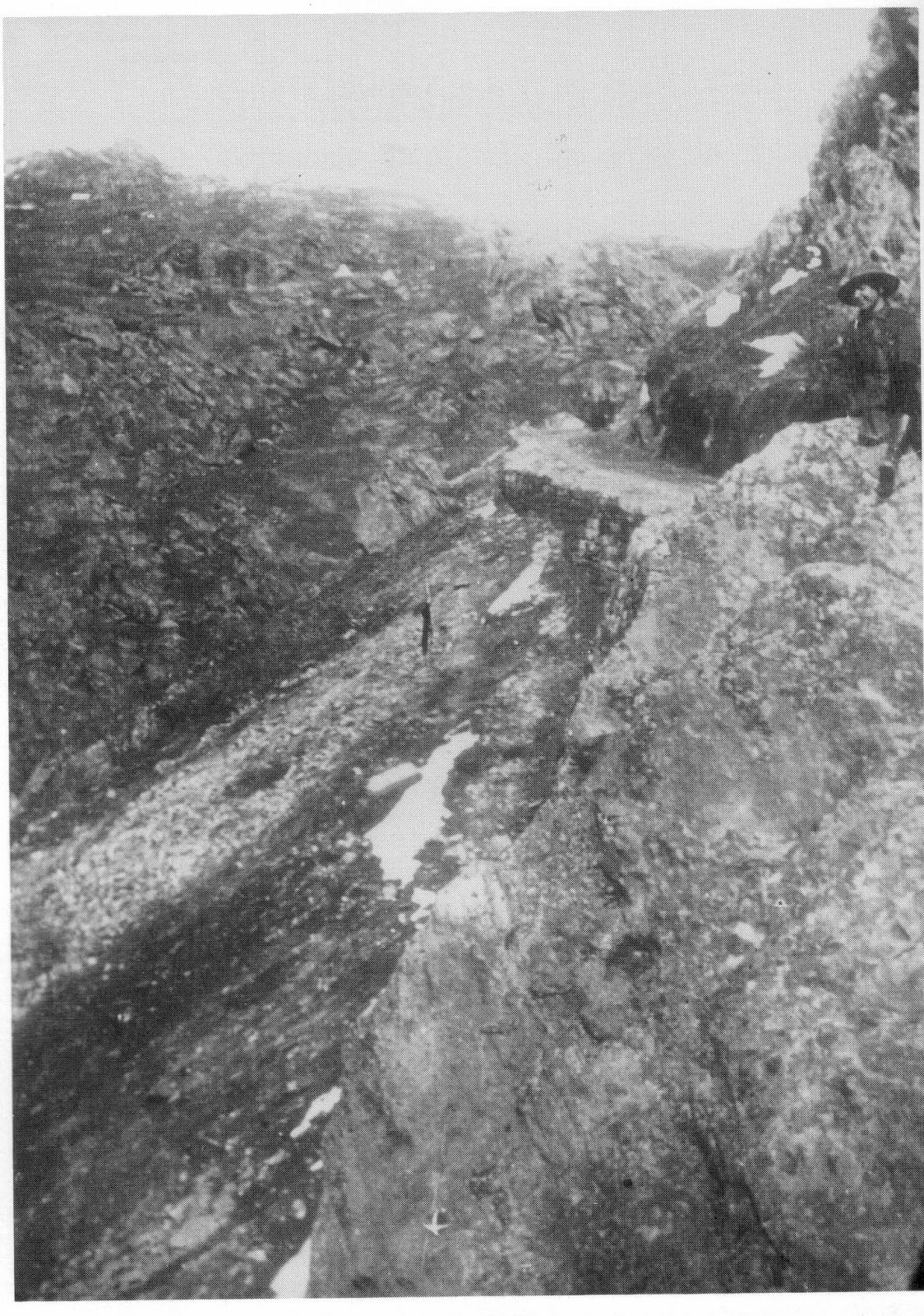 (Part of the "roads" over which Josephine's drivers forced their vehicles. Photo courtesy of Lesley M. Williams and the Mitchell Library, Glasgow)
So well did Josephine manage that the unit's commanding officer wrote, "I am so thankful to have Miss Bedford." In clear testimony to her resourcefulness, Josephine became known as "Miss Spare Parts." When the Serbian government decorated Lilian for her war work, they did the same for Josephine. Her thank-you letter from the Serbian Army Commandant read in part:


"At all times she has distinguished herself by her sympathy and her love for our soldiers and for this I thank her with all my heart."

In response to that portrait and the background data, Jo's narrative voice developed as even-tempered, intelligent, and highly intuitive, especially about what I think must have been her one great charge in life: Lilian. In many ways, Jo was an ideal wife, though she kept her independent personality and her own activist initiatives. Nevertheless, she did give me some problems.
My natural writing bent is descriptive and at times poetic or lyrical. Jo's voice was neither. Nor, unlike many of my narrators, was she to function as the reader's eye in an unfamiliar world, or a defamiliarizing voice in her own. Instead, Jo was consistently matter-of-fact, and so familiar with her environment she never bothered to describe it at all. Only after I finished the first draft did I realise the dearth of visualizing descriptions of Brisbane, their house, the car, or even of Lilian.
Instead, I had to deliver information either via asides or actual dialogue. Thus, when Lilian and Jo discussed plans to mobilize opposition to the anti-motorist Bill.


“David agrees we must oppose this, he wants some sort of public front, he says the Automobile Club.” We had joined as a matter of course when the state Club was founded, in 1905, though another emergency had kept Lilian from the actual meeting. But four years later the Club had grown practically moribund. “David says they need a new president. He wants to propose Feez.”
She raised her brows. I said, “Do you have time to finish your tea, dear? Mr. Feez is eloquent in court, as we know from that battered-child case . And perhaps, for what you plan, a barrister would be a better choice than an automobile seller.”

I had to slide in the details about the ACQ as an aside, and place Mr. Arthur Feez, later a KC who would defend Lilian in a landmark damages case, as a known that the conversation explained
More visual description had to come via "top-dressing" the completed draft. Such details I added with fear and trembling. I did not want either to impede the flow of the narrative, which Jo conducted with stately fluidity, or to change the key of her actual voice. Nevertheless, the environment so familiar to Jo is not contemporary. The look of 1909 houses, of Brisbane streets, the clothes, the minutiae of life, from drinking tea to starting a car, had to be fitted into that matter-of-fact narration. Luckily, the 1900s in Brisbane are very well documented. I had only select carefully from the cornucopia.
Yet, though a challenge, Jo's version of Lilian's story became a loving challenge. I finished the narrative hoping I had caught not only the basic facts of Lilian's life and the flavour of her personality, but a simulacrum of Jo, and with it, some of the deeper elements in their life together.
It's commonly accepted nowadays that Lilian and Josephine were very likely lesbians. There is, however, almost nothing except the stereotyping of women like Lilian, who assumed what would now be called butch mannerisms, on which to base the claim. Given Jo's period voice, I chose to suggest an ambiguous possibility rather than update their relationship as fullscale sexuality, and to stress the lasting basis of their undoubtedly deep affection and love. So one fulminating scene ends with:


"You are an angel, Jo.” She rose from her chair; paused, turned, and dropped a kiss on my brow. “I know I’m testy and impatient and swear like a trooper, and you’re always so forbearing. I really don’t deserve you, dear.”
I stood up myself and gave her a hug. “Never speak of unequal desserts,” I said, “between us.” I kissed her properly. “Now off you go, and bon chance at the Children’s Hospital.”