The Table of Mythical Beasts

And again, my post for this month's topic.
The “mythical” in this title cd mean, firstly, non-existent, including invented beasts, or secondly, beasts out of myth and legend, non-existent or not.
A fantasy writer inventing a beast from scratch naturally asks, Can I make this seem original? A fantasy writer looking to a legendary beast – a dragon, a unicorn - knows that s/he faces the answer given by one of Barbara Hambly’s vampires, when asked if they had ever tried to use other ways of getting blood: “Everything has been tried.”
And with the famous mythical beasts everything HAS been tried. Yet, perversely, if you do use/recycle one, yours will never be quite the same as every other version. If only because your writing style, hopefully in a good sense, is not like anyone else’s.
Way back in the last century, before I ever wrote anything that cd. be labeled fantasy, I did decide to write a fairytale. It had only two parameters: it started with “once upon a time,” and it had a monster/weird thing per chapter. At the time my brain was stuffed with enthusiastic research into antiquity, and the second parameter was a cake-walk. Said “monsters” included an Assyrian hawk-headed god, a chimera, of sorts, a serpent oracle, a couple of Gilgamesh Scorpion Men, and, among others – a unicorn.

I did not actually think, how can I make this unicorn original? Nor did I rehearse all the versions I knew, right down from James V of Scotland’s famous “Fenced Unicorn” tapestry that I finally saw in 2012 in Stirling Castle.  I didn’t even recall the airiest and most delicate of the modern sugar and good-magic incarnations, in Peter Beagle’s The Last Unicorn. Mine just came through the avenues of the story – written in longhand, omg – and – um – there it was.
At this point, Our Hero and his Faithful Sidekick (I was also very traditional about questers in those days) had passed the set-up stage,  weathered their early tests and were facing Serious Danger Number One – Lost in Desert During Murderous Pursuit. Which had modulated to Lost in Desert in a Sand-storm. Anddd:


Perhaps it was the thirst that made them heedless when the wind’s regular onslaught broke into veering gusts; and perhaps it was the thirst that hid from them the way the sand now crunched thin and hard under their feet; certainly it was the thirst, locking them into a stupor of endurance, which concealed Sweetwater’s true avenger until it was too late.
Two sand flurries had clashed, an eddy recoiling upon itself, and it came upon them through the curtain, so all they saw was a flash of solider, linearly moving white; all they heard was the crr-unch crr-unch of approaching hooves matched to the grunts of a galloping beast. Then something hit the mare’s right side with the impact of a new-fired cannonball.
The shock bowled her right off her legs and over the prince at her left shoulder, down in the sand beyond him with a great horse scream of pain and shock and fright. The overset prince caught one flash of milk-grey belly and thrashing legs as they arced over him; a sector of open sand; then at right angles to the rest a pair of white, driving hocks that plunged like a fired bow and were gone.
He was rolling in the sand, a snapped spear haft vertical at his elbow, Ervan and the bay a mist shadow beyond his feet. Beside him, all her side a flaring scarlet shield of blood, the mare was trying to get up. And beyond her the attacker had wheeled to complete the kill.
Ripples of silver hide glistened through the sand murk, slender steel muscles played above cloven yellow hooves. It had a horse’s head but a goat’s beard, a pure gold eye, cold and impassive as a surgeon’s, and from the silver forehead a length of gleaming, whorled tortoise-shell was levelled like a spear. The gleam was a lacquer of fresh blood. The goat’s chin tucked under as it trained its weapon on the fallen mare, the delicate hocks were flexing like tempered steel.
The prince struggled onto an elbow. As he did so he saw the pain and terror in his mare’s eyes, and suddenly the sand mist went a bloody, mottled red. His hand shot to the snapped spear. He wrenched it out and floundered up, yelling, “Come on!”
Though it came out as a mere cough the movement sufficed. The unicorn’s eye flicked. Quick as a great cat it changed aim in mid-career, leapt the mare with one feather-light spring and charged the prince.
He had dropped on one knee. Now he planted the other on the broken spear butt and leant it up and outward, gripping it in both hands. The blade was just above his head. He knew the haft was too short, he knew that even if he aimed true the unicorn would transfix him, and he did not care. He had forgotten all about the Quest. He knew only that his innocent mare was dying, and he meant to have her revenge.
The golden eye leapt at him, the nostril flaring like a great red rose. He heard its quick breath and somehow admired the splendid force with which its hind feet punched the sand. I shall die with honour, he thought, and dropping the spear point below the round ringed boss of the levelled horn, he trained it between the cushions of that sleek silver breast.
But suddenly a shadow sprang over him. Something flashed; there was a brazen scream, an axe-like clunk! A silver projectile hurtled past, a spray of blood drenched his face, and the swing’s impetus dropped Ervan on his knees beside the prince, yelling, “Got him! Got it! Look!”
Out in the fog the unicorn pivoted, a splendid, deadly javelin haft, rearing, beating the air with its forefeet, braying with rage and pain; and the prince saw what Ervan had got.
The horn had been lopped. Its point was gone, and the trunk played like a fountain, three or four simultaneous sprays of blood.

No, my unicorn wasn’t pretty, or in the least simpatico. I did hope it was powerfully vivid, menacing, and very definitely Elsewhere.  But the creative unit, aka the Black Gang, were in their usual mode, right down to the lopped horn: like the heads of cattle I had seen dehorned back home in Australia, it spouted not one but two or three jets of blood.
The Last Major Battle was even more aberrant: a confrontation with the Scorpion Men, it was going to be awesome, a heraldic swash-and-buckle, larger than life – in fact, mythical. Unfortunately, the Black Gang extrapolated the consequences of swinging a sword two-handed at a six-foot  monster while standing on an ice lake, and ye heraldry degenerated into an ice-hockey pile-up crossed with a fallen Rugby scrum.
The consequences were definitely catastrophic, but the actual event? Traumatic, ferocious, bloody. Yep. Mythical? Well, er – no. It seems if I do mythical, with beasts or anything else, it very definitely turns out nearly all my own.
Posted by Sylvia Kelso at 2:30:00 PM No comments: 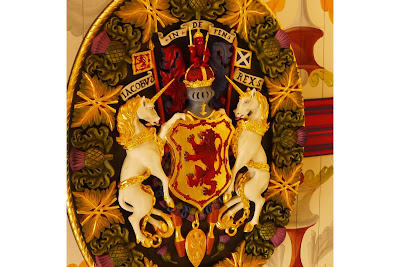 Read. Enjoy! Maybe even find a topic to think about ...

This time we're almost in at the deep end. Or rather, here's the last paragraph of Snip 2, preceding Snip 3.
To begin at the beginning, there was Snip1, and Snip 1 AND Snip 2 is here

This time I was not vouchsafed a reply. Voices came from behind us, others descending the Rue de la Croix Rouge from Old Town. My interlocutor flung up his head, much in the manner of a startled deer. Then in one motion he swept his outer garment round him, in three enormous bounds reached the lower wall, swung himself over with the spring of an East Indian orangutan, and vanished. All that remained was the flower, a spot of purple, darker than blood upon sere winter grass.

Picture, my friend, the speculation, the conjecture, the excitement generated in me by this interlude. Three times that day did uncle Laurent have to chide me, even to cry laughingly, “Fie, Anton, do you fancy yourself back at University? The house heir blotting his ledger like a callow clerk? For shame!”
My internal ferment had hardly subsided before, next day being Sunday, some friends had proposed a walk in the Plainpalais. It was a clear afternoon at last, the trees finally leafing, and a mere brisk breeze. As I approached our rendezvous, motion in the nearest copse caught my eye. Something large and dark had bobbed up and hastily down again. In a moment my eye distinguished, amid the birch-boughs and rhododendron bushes, the unmistakable form of my acquaintance from the Parc des Bastions.
“Sir!” I hailed him, turning aside. “Monsieur del Fuegan!” What other appellation could I use? “How do you, sir?”
Recognition seemed to deter him from what had promised to become open flight. While he wavered, I drew near enough to make such escape rank discourtesy. “You too are enjoying this fine day?”
He nodded and mumbled something, but this time I was determined to assuage my curiosity by whatever unmannerly means. “You are staying in Geneva? Or along the lake, perhaps?”
Before he could reply a woman cried behind me, “William! William! What are you doing?”
Posted by Sylvia Kelso at 4:41:00 PM No comments:

This time, all of Scene One:

My dear Pierre,
Your letter has come at last; and after such aid as yours, in such an enterprise as this has proved, how can I not fulfill my promise? I write then to inform you, fully  and frankly, “what it was all about.”
Anticipating your command, I begin at my own beginning: that first glimpse of the Promethean, one bitter cold morning in the Parc des Bastions, attempting, as I thought, to eat the hyacinths.
At first glance I assumed this was yet another unfortunate mendicant, cast abroad in the second season of famines after the summerless year. Drawing closer, I felt in a pocket and suggested, “If you wish, I will give you a franc; then you need not eat the flowers.”