Back to the Table Again

The Great Travelling Fantasy Round Table Guest Blog is spinning again. We are with Warren Rochelle this month, with the topic, The Hero and the Quest, and you can see all the thought-provoking answers here. Including my own musings on the Quest or not-Questness nature of my third Amberlight novel, Source.

Just out from McFarland, edited by Janet Brennan Croft, her collection on Lois Bujold's SF and Fantasy. I even managed to get an essay in. If you check out the McFarland's page, go to ToC and Excerpts and scroll down and down and you will find my piece on cyborg bodies in Lois's Memory. Due out on Kindle in February I believe. Have fun!
Posted by Sylvia Kelso at 5:22:00 PM 1 comment:

More Food on the (Travelling Round Table) Fantasy Guest Blog

And here's the second round of posts on Food in Fantasy, from Chris Howard, Valjeanne Jeffers, Carole McDonnell and Theresa Crater. Enjoy!

How do you eat underwater?
Food wasn’t high on the list of difficulties to tackle for a series of books about people from the sea, with at least half the action taking place deep underwater. If I divided up my world-building time for the Seaborn books more than half of it would go  to undersea combat and the kinds of powers, “bleeds”, magic, breathing, as well as sorting out their limitations, how they are passed to children, and other details.  Most of the other half was in cultural development, cities, history, interaction with the surface, social structure, why a people who are apparently successful have such a low population—in the millions. 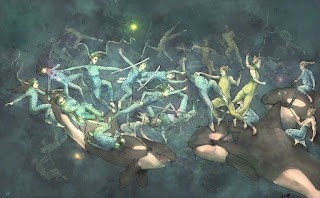 But food proved to be more difficult than combat.  Even if there’s magic involved in making things work in a fight, it can be applied to the weapon once. Everyone in battle-space doesn’t need to perform something crazy three times a day in order to sustain their strength and stop their tummies rumbling.  Right off the bat I imagined—given their technology and powers—you could reduce friction and drag in the water for edged weapons and bolts from crossbows, and spearguns, so that battles didn’t look like thousands of free-falling astronauts spinning and fumbling in slow motion, taking mad swings at each other.  And everyone looking stupid rather than dangerous or fierce.