Now available on the Wildside online catalogue, either as print or ebook. The cover doesn't look so good in such close-up as they've given the front half, so re-posting the entire wraparound again, just to show what it's *supposed* to look like. 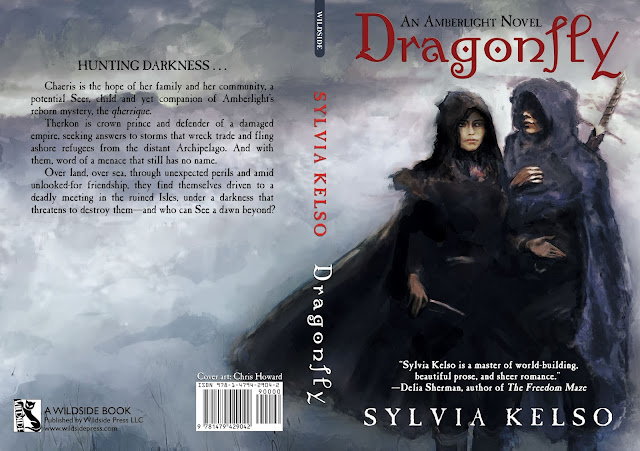 Didn't hear from the long-suffering  Carla at Wildside about the actual release date, and have been away over the last week, but *Dragonfly* is out there anyway. At last!
Posted by Sylvia Kelso at 5:48:00 PM 1 comment:

At last, Dragonfly is almost ready for release. Almost 17 years since the idea for this one first rode in on a horse I wasn't ready to deal with, in the middle of a crisis in the contemporary fantasy duo, and almost 10 years since this one was actually finished. With many crises and calamities in between. But Now!!

We have, among other things, after the usual negotiations with the ever-patient and always-amazing Chris Howard, my first wraparound, all-in-one-piece cover. 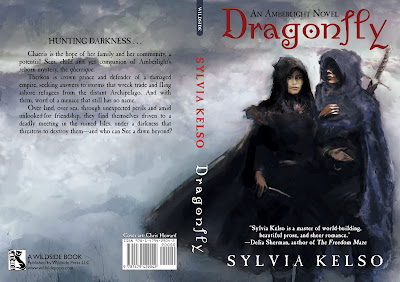 Here's the anthology cover for "Not So Loud." Due for full release on June 1st from Schreyer Ink. 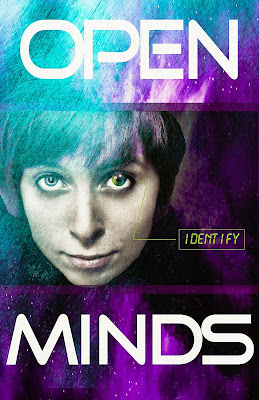 Schreyer Ink also have in mind an online launch on June 1st, Central US and Canadian time, involving anthology and other authors and the publisher all hosting sections.
I will be hosting an hour at 8pm on June 1st, for interested US and Canadian parties, and at 11 am Friday June 2nd for anyone over here in Oz. The Facebook link is:

Not sure yet what my part of the program will contain,  apart from some sort of quiz for the prize of one, or two, or three ebook versions of Amberlight, now out in the wild again courtesy of Wildside Press.  Drop in and find out if you are interested!
Posted by Sylvia Kelso at 5:04:00 PM No comments:

The last year's output has been mostly shorter, if not short, stepping down from "Death and the Maiden" at 22K words, and out in Feb. 2017, to a short story I finished for a Christmas deadline, about 9K words, titled "Not So Loud."
"Not So Loud" was written for a call for subs on the theme Gods and Monsters; I wasn't intending to do such, but one day around October I was raking leaves in the front yard when two voices suddenly shouted in my left ear, "It's a monster!" - "I tell you, it's a god!" What could I do?
Took a couple of months to figure who they were, where they were, who the narrator was, and what was going to happen to them all; a lot of it was either research or extrapolation for a "real" SF story - eg., what's the atmosphere on site, the gravity, the geology, if it's a planet what's the axial tilt, X-ray input, etc. etc. and then a lot of jiggering with the draft to tuck in all the loose ends. Only just made the submission deadline.
However, only just had the story bounced back when I saw another likely market. An indie called Schreyer Ink Publishing  was taking subs for an anthology then proposed on the theme of "Tolerance and Intolerance." The SF story, finally titled "Not So Loud," was more about the consequences of paranoia and clinging to outmoded stereotypes, but the consequences, I figured were close enough to try there as well.
Delightfully, the editor liked and accepted the story, conditional on getting enough good subs to float the antho. That's now happened, so I'm in the throes of a finicky format for the, we hope, final ms.
Meanwhile, a troll through possibles on the Facebook market page Open Call turned up an antho to be titled Strange Beasties. As usual, the Black Gang, aka the creative crew, first claimed to come up empty on any such idea. But then a chance look at a video of a monster glacier-calving lit a small but persistent fire in the cellar.
And now, I have in first draft an at-this-point 2.5K - really short - story: to be called either "Ice" or "Viewfiinder" unless some better title comes along.
Luckily the deadline for that, I think, isn't till June, so there's time to mess with it.

Meanwhile, just for interest's sake, here's the opening of "Not So Loud". I like this, if only because it follows one essential in my own recipe for good SF - no great indigestible data dumps.

*      *        *        *
“It's a monster!”
“I tell you, it's a god!”
I could hear Hosea and Joel shouting a whole hillside away; a moment later, scraps of higher-pitched voice warned Eiluned was getting involved too. Batting my way through yet another so-called aloe thicket and up a stony watercourse, I finally sighted them, and tried to shout in an undervoice through my recorder, “Not so loud!”
Three flushed and glowering faces swung, environmental suits broadcasting untoward sweat and elevated pulses, and I hastily recited the First Reconnaissance Party protocol: “In unknown conditions in an untested environment, avoid firing weapons, damaging the surrounds, and creating a soundprint which may alarm or anger indigenous life.”
“Yeah, what life?” snorted Hosea. “Rocks and aloes and sure, micro-organisms and bacteria – come off it, Jupe!” Like most Old Terran descendants he pronounced my name as “Shoop.” “There's nothing in this rock-hole but relics.” He pointed at the shadowy recess,“And this one -!”
“I tell you, you're totally misreading it!” Joel shouted even louder. “It's not a monster, would anybody waste time and effort carving a monster into a shoulder-high petroglyph and putting it right in the only rain-proof shelter in fifty square kilomets -?”

Maidens and Magic is here


Maidens and Magic was released on February 14th. Now out on Amazon, here.

And the cover again, this time for a phone as well: 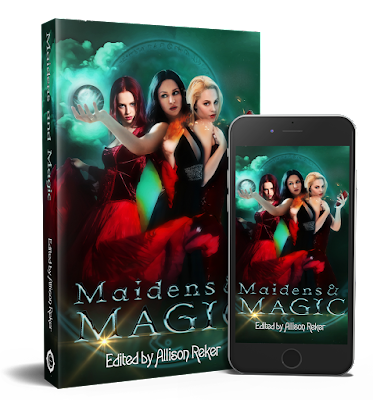