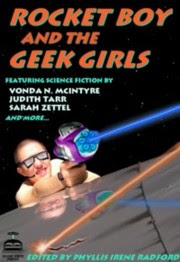 the first anthology from Book View Cafe, available on the Cafe,
Phyllis Irene Radford and Maya Kaathryn Bohnhoff, editors
“Fasten your seatbelts and brace your
tentacles. These all-star tales of epic wonder from the genre’s masters will sizzle through your mind like a spaceship on re-entry burn.”
— David Williams
Author of The Burning Sky

"The Cretaceous Border," in Neverlands and Otherwheres from Susurrus Press. An SF What-if right in your own backyard


"The Sharp Shooter” is set in the shared world of New Ceres, where the 18th Century has stretched into the Space Age. Appearing in New Ceres Nights, from Twelfth Planet Press.

Amadeus Lebrun found his bull at daybreak, after a more than anxious night. Three times the yard cannies had flown in a barking frenzy from their kennels to the palisade. The second time the house felis knocked Suzanne’s precious miniature of Queen Antoinette right off the mantel as well. And the third time, the young steers in the house field rushed, a rumble drowning the cannies’ din. Amadeus had cringed in his bed, waiting for the crash at the wall, the bellow of injured cattle, and thud of tumbled stone. But the steers had not broken loose. When he saw the bull, he almost wished they had.


"An Offer You Couldn't Refuse"
With Lillian Stewart Carl, in
Love and Rockets
From Tekno Books and DAW


The fuse popped and the big aerial shell flew hissing up exactly two hundred feet, then burst with a satisfying Crump! Darryl almost felt the, Aaaahh, from the crowd behind the safety fence. A perfect Chrysanthemum, he thought, as the great globe expanded in a deluge of brilliant blue meteors. And this time I didn’t just get to carry in the shell-boxes and haul the rails around. This time I was the one trusted to bed the mortar, to set and connect the shell itself.

Beside him his boss’s fingers had already keyed another sequence. Three Palms flowered in the Chrysanthemum’s wake, vivid magenta plumes fanning round the smoke trails that symbolized their trunks. Behind them, on the ground, white and emerald fire burst from the first of the seven Cakes. A bit too fast, he protested silently, as he always did. Let them savor the last one a bit . . . But he knew his boss’s eye was set on the height of pyrotechnic ambition: New Year’s Eve, running the Sydney fireworks display.