Latest Finished - NOT Where I'm Going


Back at the end of December I finished a steampunk vampire story (I know, I know, I didn't think it was possible either) set in South America - the home of the original vampire. Bat, that is. Called, eventually "The Honor of the Ferrocarril." Currently sitting in the editor's Inbox at an indie press. Started with the impossible-to-ignore sentence from hell:
"As the train pulled out of La Paz (station, added later) the man standing beside Concepcion Gonzaga in the corridor made her an offer that took her breath away."
Turned out he was offering her immortality if she wd. let his "little bat" share her stateroom that night. Which shd. be a dead giveaway to anyone seeing the target antho's title, Vampire Steampunk Tales. But I, at that point, had no idea who Concepcion Gonzaga was, whether trains ran to La Paz, or even where La Paz might be.
In fact La Paz is 12 thousand feet up in the Andes, in Bolivia, at the bottom of a huge valley in the bleak Altiplano, about the Highest Plain in the world. And, yes, there are trains. Amazing railway tracks going back to the 1870s, climbing to 15K feet at times through Peru, designed and partly built by a must-have-been-genius Yanqui engineer and entrepeneur and speculator called Henry Meiggs. Just the pix are enough to take your breath away.

And an unspecified view somewhere along the line. On a bridge of some kind, judging by the steel stuff you can see down below. 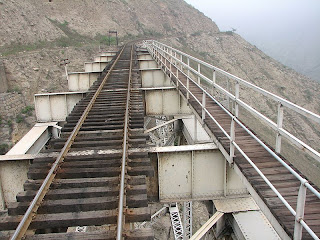 A natural playground for the long-term geek.
The vamp was almost as interesting. Also in the mix was Colca Canyon, a place the railway still does actually cross at some unspecified height; though the canyon itself is bruited as the deepest in the world, at 9K feet, and it was pretty remarkable too. All in all, the research for the story was almost as good as writing the story. But somehow, given that the railways are slowly shutting down in favor of bus services, and the number of political upsets in Peru's list of presidents, NOT a place I'm likely to go myself . . .
Picture Sources:
http://mikes.railhistory.railfan.net/r022.html
http://commons.wikimedia.org/wiki/Category:Railway_bridges_in_Peru
http://www.peru4x4rentacar.com/en/colca_canyon.html
Posted by Sylvia Kelso at 4:29:00 PM