Se, we are up to week two for the new spin, and here's my Animals in Fantasy contrib. Now up on Deborah J. Ross's blog with the rest of the eight posts for the month.

This is one of those grab-bag topics: shake it and a confetti of sub-topics leaps out. Just to start with, especially in high fantasy, there are the normal but mandatory animals that indicate a pre-industrial or agricultural society: cows, pigs, etc., and above all, horses, that necessity of all heroes down from the Round Table knights.
Horses can come with varying degrees of verisimilitude, and for me at least, consequent levels of suspended disbelief for the whole story.  Sharon Shinn’s Mystic books, for ex, don’t seem aware that horses on a journey need a lot of feed, water, shelter, grooming – as when chilled through by a snowstorm – and that their likes and dislikes include both rider and equine companions.  In total contrast, Aerin’s horse Talat in Robin McKinley’s The Hero and the Crown is a personality in his own right, but a wholly equine personality, and as present a character as Aerin herself.
Equally essential to fantasy are the magical animals. Most often, they are speaking animals: to use a classic example, the Badgers and Reepicheep the cavalier mouse from the Narnia books. There is some discussion over what makes a beast fable as distinct from fantasy: my answer would be, in a beast fable the animals are allegorical, as in Animal Farm. The Badger and Reeepicheep stand for themselves, and are therefore fantasy. So, too, is the presence of animals as povs and purveyors of a wholly non-human society, as with Diane Duane’s felines in The  Book of  Night and Moon, and of course, Watership Down.
Where horses and cows lend essential verisimilitude to a pre-industrial world, magic animals matter in an entirely different way.  Such creatures say very clearly that this is not realism but a genre of Elsewhere: Yeah, Toto, we’re not in Kansas any more.

Such animals often supply the first step toward suspension of disbelief in a fantasy world. Close behind in this role come original invented animals, such as Judith Tarr’s seneldi in the Avaryan books. Riding animals, though not horses, yet differing most clearly in the horns on their heads. More memorable to me are C.J.  Cherryh’s “goblin horses.” For Goblin Mirror, they take a starring role on the cover, but inside, 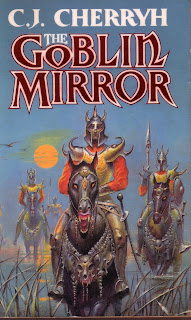 their strangeness stops at fiery eyes and three-toed feet. The full Monty comes with the “Night-horses” in Rider at the Gate: linked, like McCaffrey’s dragons, by telepathic rapport to one human, three-toed, omnivorous – happily consuming fish, bacon, small animals and “biscuits”– and with a bouquet of other psychic abilities. The Night-horses and their native companions produce a fascinatingly Other world, where the visible landscape is continually overlaid with a psychic view, “the ambient,” as infra-red vision overlays ordinary sight.
Different again are some of the oldest Elsewhere creatures, the were-animals: the selkie, the lamia, and used almost to overload of late, the werewolf. Definitely of Elsewhere, though since Laurell Hamilton very much at home in contemporary fantasy as well as paranormal romance, timelessly fascinating, to storytellers and readers/hearers both. But with the invented or magic animal, beasthood is in no doubt; the were-creature is another kettle of fish. Is it primarily a beast, or primarily human? The creature, question, and arising dilemmas have been a rich source for imagination from early fairytales on down.
And before and beyond and after all these come the myths and legends: the creatures that never existed, yet which have kindled imagination from times before writing. The chimera, the Pegasus, the griffin, the manticore, the basilisk, the harpy, and the dragon, above all.
Dragons have become a modern fantasy leit-motif that has outlasted even the snowy peaks once endemic on fantasy covers. Dragons above all signal, Elsewhere, and perhaps, if the reader and writer are lucky, that elusive quality, as I’ve said so often, that we may all be seeking in fantasy. I’ll let Tolkien sum it up, here from the famous lecture “On Fairy Stories,” but as so often, with that language which underpins all of Middle-earth.

[As a child,] I had no desire to have either dreams or adventures like Alice … and Treasure Island left me cold. Red Indians were better: there were … strange languages, and glimpses of an archaic mode of life, and above all forests … [But] best of all was the nameless North of Sigurd of the Volsungs, and the prince of all dragons … The dragon had the trade-mark Of Faerie written plain upon him. In whatever world he had his being it was an Otherworld. Fantasy, the making or glimpsing of Otherworlds, was the heart of the desire of Faerie. I desired dragons with a profound desire.
(OFS 135, “Children” Sub-section).

Sylvia Kelso lives in North Queensland, Australia, and writes fantasy and SF set mostly in analogue or alternate Australian settings. She has published six fantasy novels, two of which were finalists for best fantasy novel of the year in the Australian Aurealis genre fiction awards, and some short stories in Australian and US anthologies. Her latest short story, “At Sunset” is in Luna Station Quarterly for September 2012.