Excitement of the week, the month, the year so far.
Timmi Duchamp at Aqueduct Press has officially bought my novella, "Spring In Geneva."
It’s a 25K word riff on Frankenstein in which the fictional life-creation experiment in the novel turns out real, masterminded by Byron and Percy  Shelley, wanting to produce a superhuman (as in Percy Shelley's idea that poets legislate for the world.)
The story involves Mary Shelley in person, along with a rehabbed version of the Monster, a Swiss banker’s son, some steampunkish parts and a good deal of swash and buckle in the environs of Geneva.  Byron has a cameo as the master-villain, in which he very nearly ran away with the whole story.
I had enormous fun writing this, not least because I got to use such outrageous cliches as "nether garments" and lines like, "'I have ruined all!'" There was also the swash and buckle: ambushes and sword-fights,  Swiss bankers threatening Byron, and a hommage to Nikola Tesla as well as the author of Frankenstein itself.
The story will come out as a standalone novella in Aqueduct's Conversation Pieces line, in both print and e-versions, somewhere around August 2013. In the  meantime, I hope to do a couple more blogs here, and maybe share around a couple of preview pieces. Just as a start, here's two of the pix I used for thinking points in the writing process.
Mont Blanc, a thematic if slight presence in the story, from Mont Saleve, which had a bigger part, just outside Geneva. 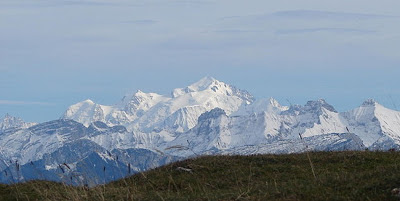 And Mary S herself, my favourite image of her, which I much prefer to the somewhat saccharine portrait with the books and black gear, painted around 1838. I haven't been able to find the provenance for this one, but it's clearly earlier, and it has a lot more steel showing than the later portrait. 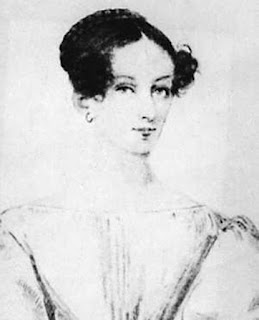 This sketch more strongly suggests that she was a redoubtable lady, and I also had a lot of fun writing her like that.
Posted by Sylvia Kelso at 5:48:00 PM