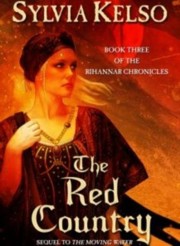 Check out the Goodreads Giveaway Pages, where I'm putting three hardback, library-binding copies of the third Everran Book, The Red Country, up for grabs this month. Advance notice that the fourth book, The Seagull, has been past the wip readers and is almost ready to go up on Kindle.

The Red Country: A few words
The princess Sellithar will inherit the kingdom of Everran, small, peaceful, secure; and stifling under dynastic traditions that Sellithar burns to strip away. The mage Zam is an aedr, the wizard guardian of half a continent, to Sellithar a legend come to life. He doesn’t do well with people. She’s not so good at tact. But to survive a marauding empire, the wild, harsh, fickle, fragile, beautiful desert of Hethria needs them both.
Some wars you just can’t win alone.

The Seagull: A few more words.
The only thing worse than being made a wizard is to be born a wizard.
The mage’s Arts came to Phaz at birth. His father Zam is the wizard guardian of the great desert Hethria. His mother Sellithar was a Crown Princess.  The rulers of mighty Assharral want him to inherit their empire. What choices does he have left?
Especially with a family who fear that evil is his natural bent?
He could always run. But just to help things along, Phaz has an Art of his own that offers glimpses of the future. Run or stay, his is not where you’d want to end up.
Posted by Sylvia Kelso at 4:37:00 PM