A while back on Facebook my mate Brendan Baber posted a whole list of Pompeian graffiti. It brought back to my mind a book of poetry I found at the Twice Brewed Inn, 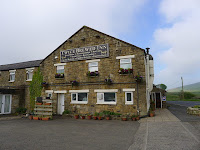 halfway through our walk along Hadrian's Wall. The whole book was called Writing on the Wall (yeah, yeah, cutesy), and this one poem mentioned another Roman graffito, that in translation read simply,

"VERECUNDA
ACTRESS
LUCIUS
GLADIATOR"
It stuck in my mind; such a a fragile commemoration of a past moment's happiness, of two lost, forgotten people's lives. Yet such a poignant recipe for disaster, in those four lines. Brendan's Pompeian post brought it back to the top of my mind, and all of a sudden, there was a poem.


VERECUNDA ACTRESS
LUCIUS GLADIATOR
She was slave or bond –
The name’s from a family
In the Vindolanda tablets,
Known on the Wall.
He? No clan name, family name -
Could have been anyone,
Gaul to Numdian
Sarmatian to Scot,
Subsumed in the Empire.
Doomed by trade.
If it ended happy
How could you hope?
That she bought herself out,
That he lived till his wooden sword,
That they loved together
To a gentle end?
They lived, they met,
It must have mattered,
Because they wrote.
Tabula rasa.
Now the tablet’s wiped.
You can re-inscribe
Anything
Except the truth.

A bit of later research disclosed that the names were on a pottery shard, probably from a cup, and found in Leicester, quite a way from the Wall. Which only raises more questions, eg. what was a ludia, an actress, doing in Leicester, with the family name of a Prefect of cavalry up on Hadrian's Wall? How did she get there? Who was she, after all?
Tabula rasa. You could suppose anything. Everything's gone, except the names.