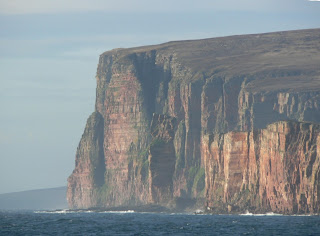 In the sequel to my soon-to-be-released novel, Source, a lot of the action takes place in an Archipelago somewhere in the Riverworld, and despite my best efforts, the Black Gang, aka the creative crew, were determined that the language and the people and a lot of the society should be based on Orkney, rather than something closer to home like Tasmania, or even NZ. So a good deal of the action also involves Orkney landscape, then based only on photographs.
Going to Orkney was partly  retro-research, to see just how far the Archipelago had slid from its original base. Rackwick Head is spectacular, much photographed, and one of the first parts of Orkney you see on the ferry to Stromness. In the sequel to Source, it's also where a disastrous wreck takes place. I was happy, in the usual writer's way, to see that in real life it was everything I'd hoped.
Posted by Sylvia Kelso at 12:53:00 PM